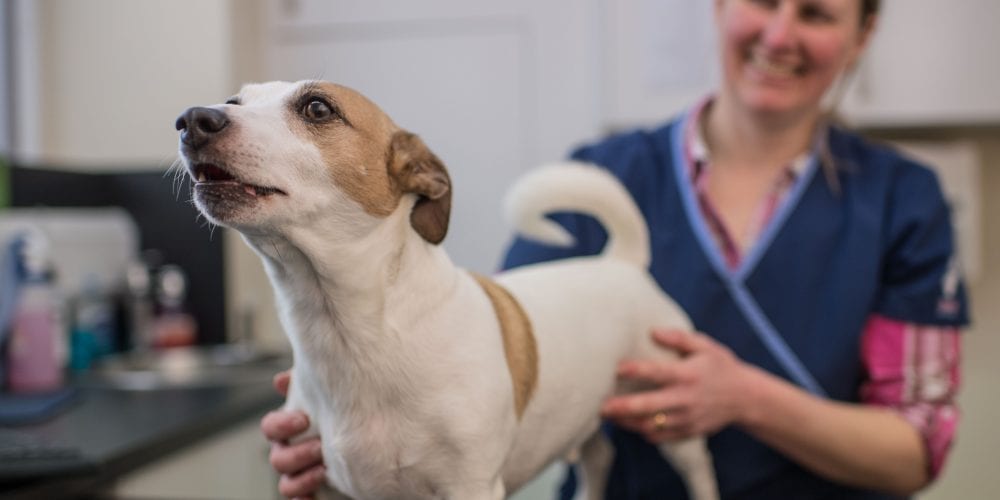 A Jack Russell was left in a sticky situation after chewing on junk mail and ending up with his mouth glued shut.

Poor little pooch, Ottis, was rushed to Beech House Veterinary Centre in Warrington by owner Donna Fisher after chomping on a glossy leaflet that formed a papier mache-like substance and cemented his jaws together.

The ten-year-old had to be sedated while experts at the Wilderspool Causeway practice, which is part of the independently-owned Willows Veterinary Group, used forceps and dental equipment to remove it.

It was vet, Becky Milner who came to Ottis’ rescue, and the mum-of-three, who has worked at the surgery for 11 years said: “I’d recently read an article in a veterinary publication in disbelief about a dog whose mouth was glued shut after chewing a glossy leaflet, so when Donna called the surgery, I knew exactly what had happened.

“When Ottis came in, we sedated him and used forceps and dental instruments, including a dental scaler, which has water and a probe, to allow us to remove the hardened glue and paper from between his teeth.

“Because dogs’ upper and lower teeth interlock so well, the paper and glue had cemented and became amazingly solid.

“It took us more than half an hour to remove it all.”

Now Ottis’ owner, Donna, 34, is warning others to keep their pets away from the post and has since invested in a dog-proof letter cage.

The mum-of-two from Warrington, who also has a Yorkshire Terrier, said: “I was tidying up when I heard the postman putting mail through the letterbox.

“There’s always a race between me and the dogs to see who can get to the door first and nine times out of ten, it’s me.

“But on this occasion, Ottis beat me to it and grabbed the post from the postman’s hand.

“He had hold of a glossy leaflet and I was trying to get it off him, telling him to drop it, but he held on to it.

“I tried to pull it off him, but it ripped and he still had a part of it in his mouth.

“He still wouldn’t drop it, so I decided to leave him for a moment and then have another go to get it off him.

“But when I went back to him, he went straight to his bed and was looking at me strangely, then he started clawing at his mouth and I realised it wouldn’t open.

“At that point, my heart just sank and I knew something wasn’t right.”

Donna rang Beech House who urged her to bring Ottis in immediately.

She said: “I got Ottis there within ten minutes and he had to be sedated while they removed it,” she said.

“He already has a heart murmur so I was worried he wouldn’t make it.

“It felt like forever waiting to hear news of how he was.”

Beech House is part of the independently-owned Willows Veterinary Group. The group offers a wealth of knowledge and expertise through a network of 25 small animal practices, a referral veterinary hospital, two equine centres and a seven-office farm practice, located across Cheshire and into Greater Manchester, North Wales, the Wirral and Staffordshire. Willows is accredited by The Royal College of Veterinary Surgeons.

Vet Becky said: “I’ve seen some odd things in this job but this is the first time I’ve dealt with a case like this.

“Obviously, it does happen so it’s important to raise awareness and urge people to keep their dogs away from glossy leaflets and invest in a letter cage.”

Donna said: “I can’t thank Becky and all the staff at Beech House enough for what they did for Ottis that day, they were brilliant.”

Ottis has since made a full recovery from his ordeal but still hasn’t learned his lesson.

Donna said: “When he got home, he carried on going for the mail, so we went straight out and bought a letter cage.

“We’ve been meaning to get one for a long time but never used to mind so much if the dogs ripped up unwanted bills, we actually used to have a tax disc in the car with a big dog bite in it.

“Never for one minute could I have dreamed anything like this could possibly happen so I’m very keen to raise awareness and urge people to keep their pets away from the post.

“It’s not nice seeing your dog like that and it’s not how I planned my Saturday.”