Moggie Milo all Wrapped Up After Swallowing 2 Feet of Ribbon 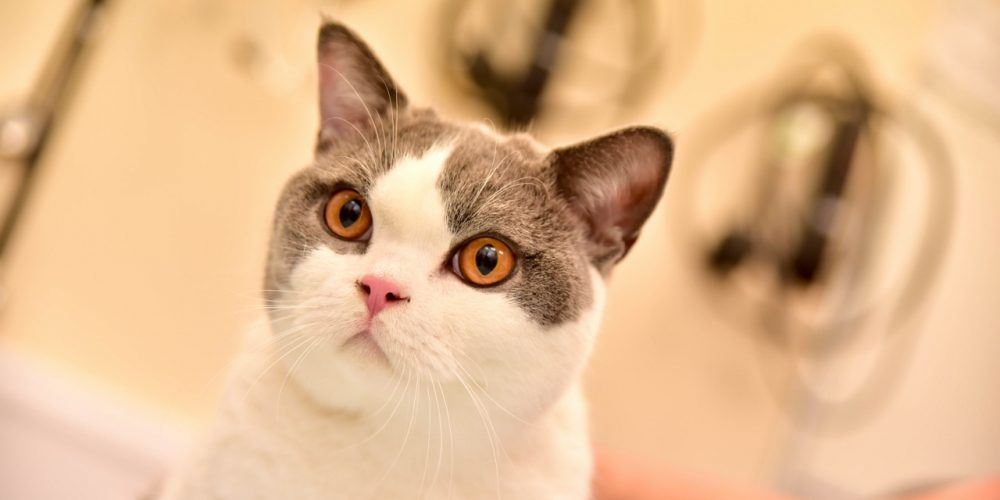 A CURIOUS cat found itself all wrapped up inside after it ate nearly two feet of ribbon.

Playful moggie, Milo, came within a whisker of death when the pink ribbon became entangled and caused his intestines ‘to bunch up like a concertina’.

Head Vet Gill White of Alsager Vet Centre, part of the independently owned Willows Veterinary Group, said: “When I opened Milo up I was staggered by how much ribbon he’d managed to eat. All the nurses in the operating room stood and gasped while more and more ribbon came out. His intestines were bunched up like a concertina.”

Thanks to Gill’s skillful surgery and the quick thinking of his owner, Nicky Brown, the mischievous 11 month old British short hair is now back home, living life to the full.

But Gill and Nicky have joined forces to issue a warning to pet owners to be especially vigilant about leaving stray objects about the house within reach of pets and get them to the vets immediately if they suspect an animal has swallowed something suspicious.

Nicky, of Alsager, who is mum to Rory, eight, and Alex, five, said: “We are always careful as I know from years of experience how inquisitive cats are. I’ve had cats all my life so I’m always impressing on the boys not to leave things out and to put their toys away each night.

“To be fair, they did put everything away in the toy box that night but I think Milo was extra inquisitive because Rory had been playing with him earlier in the day.”

Rory enjoys making things with his crafts kit and had created an improvised cat toy out of a piece of cardboard tubing with ribbon attached to the end of it.

Nicky said: “He was playing with Milo and our other cat, Max. They had a great time. Then we put it away, safely we thought. But a little piece of the ribbon must still have been visible when we went to bed.

“The next morning I found the cardboard tube in the middle of the room minus most of the ribbon. Immediately alarm bells rang in my head. I searched the house to see if I could find the ribbon but it was nowhere.

“A couple of days later Milo was not his usual self and started vomiting bile, which he never normally does. That was when I thought we must get him to the vets straight away.

“Gill was marvellous. She instinctively knew something was seriously wrong and offered to operate straight away even though it was a Friday night. We cannot thank her enough. The cats are part of the family and the boys would have been devastated to lose Milo.”

Gill took over as Branch Partner at Alsager Vet Centre at the start of 2016. It is part of the independently-owned Willows Veterinary Group which has a network of 25 small animal surgeries, a referral veterinary hospital, two equine centres and a seven-office farm practice located across Cheshire and into the Wirral, North Wales and Staffordshire. Willows accredited by The Royal College of Veterinary Surgeons (RCVS) and in a recent RCVS inspection, Alsager Vet Centre was awarded an outstanding accreditation in client service.

Gill said: “I felt Milo’s tummy and I was suspicious that an obstruction was there.

“An X-Ray showed his intestines bunched up. Ribbon doesn’t show up on scans as X-Rays don’t show material, so we couldn’t be 100 per cent certain what the obstruction was.

“But from what Nicky told me and the knowledge that a piece of ribbon had gone missing, if you pardon the pun, my gut feeling told me we must operate urgently.”

She added that it was unusual for cats to eat such a large amount of a ‘linear object’ like that.

“We often get animals in which have swallowed foreign bodies such as balls, small toys, baby’s dummies or even corn on the cob, but it is rare they will eat something as elongated as ribbon. So we were all completely amazed at how much came out of his poor intestines.”

After the operation Gill kept him in for observation overnight but the next morning he was allowed home to play again with his best mate, nine-month-old Max, a cream coloured British short hair.

Nicky, her husband Paul, their son Rory and his brother Alex, were all delighted to see the bi-coloured bundle of fun back home.

Nicky said: “He has never looked back. But we are all obsessively attentive now to ensure there is nothing within eating distance of Milo or Max, day or night. I used to have Devon Rex breeds of cat which are renowned for meddling into everything around, but the British Short Hairs have always been much calmer – until now it seems!

“We are so grateful to Gill and everyone at Alsager Vet Centre for saving Milo.”

For more information about Alsager Vet Centre go to www.alsagervets.co.uk