Buzzard is Flying High Thanks to Vet Team and Wildlife Experts 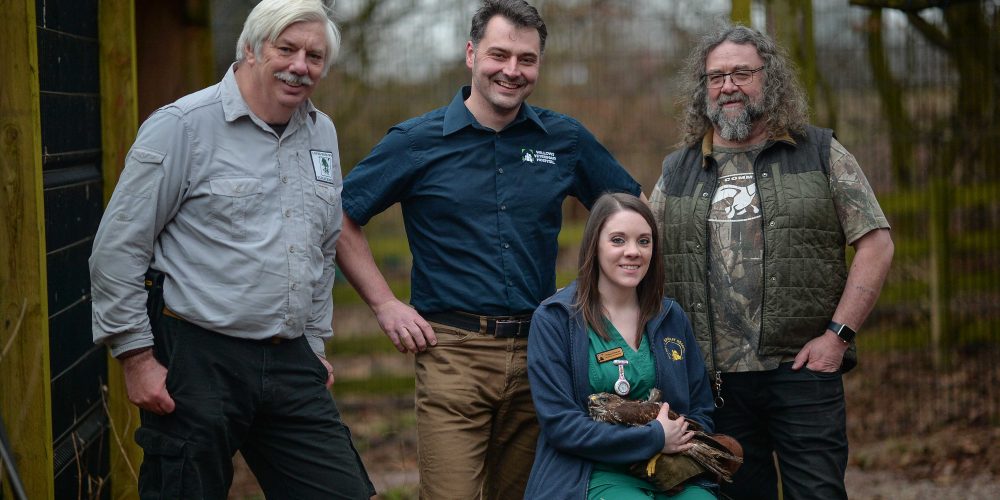 A BUZZARD is flying high after he was taken under the wing of a Cheshire vet team and experts from a local wildlife hospital.

Head vet Bruce Waddell and Deputy Nurse Manager Philippa Richmond from Willows Veterinary Hospital, based in Hartford, carried out intricate surgery with pins the width of a sewing needle on the male bird of prey which was rescued with a broken wing and perilously close to death.

The stunning bird was found on the edge of a bridleway on the Wirral by concerned member of the public Peter Costello who took him to Lower Moss Wood Wildlife Hospital in Ollerton, near Knutsford.

The hospital is run by wildlife expert Ray Jackson MBE and his dedicated team.

This included volunteer and trustee Ian Daniels who has worked tirelessly to rehabilitate the bird with the help of other Lower Moss Wood volunteers.

Now, with a well-healed wing, their feathered friend is taking the first steps back to full flight in a large aviary and Ian is confident he will be ready to release later in the Spring.

The wildlife charity, based in School Lane, has a long-standing link-up with vets from Willows Veterinary Group. They also have a vet from their Knutsford-based Holly House practice who visits weekly to help out with their veterinary skills and expertise.

As well as Willows Veterinary Hospital at Hartford, the group has a network of 25 small animal practices, two equine centres and a five-office farm practice located across Cheshire and into the Wirral, Staffordshire and North Wales.

The buzzard’s operation was a first for vet Bruce who has carried out many similar procedures on cats and dogs using pins which are held in place by a metal framework, known as an external fixator, on the outside of the affected limb.

But this was his first wing operation using the complex structure, which was chosen because all the metal work is later removed ensuring it does not affect the bird’s flying ability.

Both Bruce and nurse Philippa are thrilled by the remarkable recovery the bird is now making.

Bruce, 43, who is a dad-of-two, and has two dogs, two cats, three guinea pigs and two ponies, said: “Ian and Ray brought the bird to us to see whether we were prepared to give the surgery a go. It’s not without a fair few complications, not least getting the bird through the anaesthetic which is a higher risk especially in ill birds.

“We knew that if we didn’t do anything, then the bird would have to be put to sleep. So we took some X-rays and discovered it was the left humerus which was broken, which is like our upper arm bone.

“It was a complete fracture with two fragments which had moved out of position. So we cleaned the area, prepared the bird for surgery and put two pins into each side of the fracture and then carefully realigned the two fragments before applying the external clamps and framework to hold it in place.

“It’s important in any fracture that you get as close to perfect as you can and we were able to achieve pretty good alignment of the bones.

“Keeping birds asleep and alive when you are operating on them is one of the hardest things and Philippa did a terrific job of doing this while I carried out the surgery.”

The buzzard, who has been fed with tasty dinners such as chopped chicken and quail while it has been recuperating at Lower Moss Wood, was left to start the healing process and when Bruce re X-rayed the bird a month later, he could see the wing had healed well.

Bruce, who has been a vet for more than 20 years, then removed the stainless steel pins and the external bar before sending him back with Ian who has focused on rehabilitating him ready for release.

Ian, 63, a grandfather-of-seven, from Winsford, said: “When he first came in, I didn’t think he would make it because he was very thin and he wasn’t eating properly but there was a glint in his eye which made me think we should have a good go to help him. He’s been an incredibly lucky bird – firstly to be found by a caring member of the public who got him to us.